THE ART OF MEXICAN CUISINE 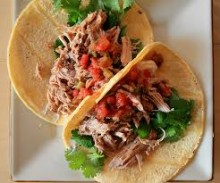 We invite you to enjoy Mexican cuisine.

Discussing Mexican cuisine we make a trip to the pre-Iberian epoch where numerous Mexican cultures spread over the extensive Mexican territory have already cheered the heart with corn, Indian pepper, bean, tomato, pumpkin, avocado and cacao dishes. That is why it has been occupying a privileged position in the world since 2010 following the offer made by participants of the Conservatoire of Mexican Gastronomic Culture (CCGM) to include it in UNESCO list as Intangible Cultural Heritage.

It is worth noting that not only traditional Mexican dishes that can be tasted in the country of origin but also the ones served in many restaurants of the world taste very well. We would like to utter some words about modern cuisine when ancient dishes prepared by the locals became popular though not very affordable due to the prices set in the restaurants of the capital and Federal District of the country. This is what some gourmands say though there are some who don’t agree with this. For example, there are some restaurants in the center that have set a task to go back to the pre-Iberian epoch which means you can try tacos or roasted flatbread at a reasonable price. The filler is interesting. – What would you like to try? Roasted flatbread with billfish, crocodile fillet, tasty wild boar dish or maybe some ostrich meat balls in huitlacoche sauce? You can also like auautles which is fly or water bug eggs. Thus, it can be everything that walks on land like a deer, quail, wild boar, pheasant, ostrich, or lives in the water like crocodile, billfish, tadpole (ant larvae), and also mosquitos and agave worms that are edible. Grasshoppers also taste nice and if you like soups you can have iguana soup.

Some say there are very sweet dishes and others say there are too spicy dishes but the truth is that there exist over 500 types of edible insects the fact being established by experts and commented upon by the Food and Agriculture Organization of the United Nations (FAO). Though eating insects is a normal thing for members of Indian societies who eat them every day, specialists in gastronomy make introduction of such tasty dishes of pre-Iberian epoch slow and steady.

My dear reader, when you go to Mexico you would like to taste traditional dishes such as tacos, famous corn tortitas with chicken or meat, tomatoes, onions and peppers of different colors, guacamole, avocado and Chilean green onion sauce with drops of lemon juice, very spicy enchiladas with a taste similar to tacos but having cheese as a filler, typical of Puebla and Oaxaca mole sauce made of chocolate and different types of chili, sesame, pistachio nuts, nuts and spices such as clove and cinnamon. There are several types of mole – black mole and rural mole.