The Geopolitics of Cheap Oil 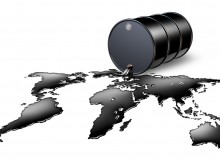 The market was supposed to save the planet.

That, at least, was the argument of many economists grappling with the problem of climate change. As fossil fuels became scarcer, they pointed out, the price of oil and natural gas would go up. And then other options, like solar and wind, would become cheaper, particularly as investment flowed into that sector and drove down the cost of new technologies.

And voila: The invisible hand would gradually turn down the global thermostat.

It’s a ridiculous argument. For one, there’s no guarantee that the market would respond in a timely manner (i.e., before we’re under water). For another, oil and gas prices are as volatile and unpredictable as a Q-and-A session with Donald Trump.

In 2008, for instance, oil hit a high of $145 a barrel. But that didn’t last long. And in 2015, despite all sorts of turmoil in the Middle East and in other oil-producing countries like Nigeria, the price of crude fell between 30 and 40 percent to its lowest levels in 11 years. That’s a bigger drop than the commodity price declines for metals, grains, and soybeans. Gas stations around the United States didn’t fully reflect this drop, but petrol prices still fell to an average of $2.40 a gallon, saving each driver more than $500 last year.

There are a number of reasons for the price drop, but it boils down to supply (more of it) and demand (less of it). The United States boosted oil production by 66 percent over the last five years, making it the largest oil and natural gas producer in the world in 2015. Other producers, like Saudi Arabia, also didn’t scale back, in part to stick it to a sanctions-hobbled Iran and snatch up its clients. Meanwhile, greater fuel efficiency and slower economic growth around the world (particularly in China) have reduced demand.

Consumers love lower energy prices. It’s not only cheaper to fill up the tank and heat the house. Your shopping bill is also smaller because of lower manufacturing and transportation costs. Airlines cut fares (or at least they should). And it’s a big boost for the global economy. As  The Economist  notes, “a price fall normally boosts GDP by shifting resources from producers to consumers, who are more likely to spend their gains than wealthy sheikhdoms.”

The other good news is that lower oil prices haven’t undercut the market for sustainable energy. In the past, cheaper fossil fuels have meant that governments and industry put off the hard decision to shift to renewable energy sources. But several factors have changed this calculus.

The international community has made a commitment, most recently in Paris, to invest in wind turbines and solar panels. Because of technological advances and government incentives, meanwhile, the cost of renewables has fallen. The price of solar panels in the United States, for instance, has dropped 70 percent since 2009, and industry observers expect even sharper cuts in the years ahead. To keep up the momentum, the Obama administration pushed through an extension until 2019 of its tax credits encouraging renewable energy. And the investment banks, usually risk averse on this issue, are finally betting big on the sector: Goldman Sachs, for instance, announced in November that it will increase investments in renewable energy by fourfold.

Another environmental benefit to lower energy prices is the cancellation of pricier fossil fuel projects. President Obama finally deep-sixed the Keystone pipeline last November. The target of heated activist protest, the pipeline had become a considerably less attractive project when oil prices fell below $60 a barrel.

The State Department is also thrilled with lower oil prices. U.S. allies in Europe and Asia are able to reduce their energy purchases (and free up resources to buy U.S. goods, including military hardware). And key U.S. oil-producing adversaries are feeling the pinch. Iran, already under sanctions on its oil production, became more amenable last year to negotiations on its nuclear program. Russia, also under sanctions, hasn’t pushed as hard in Ukraine. Lower oil prices has put pressure on Venezuela and also reduced the flow of income to the Islamic State.

Decreasing U.S. dependency on foreign oil through a boost in domestic production is not only a good media sound bite and a hit with the voters. It also turns out to be a potent weapon for U.S. foreign policy, which is good news for battling the Islamic State but bad news for restraining arms sales.

And Now the Bad News

Much was made in December of news of a potential global “peak” in carbon emissions. Researchers from the University of East Anglia and the Global Carbon Project released a report that greenhouse gas emissions dropped in 2015 by 0.6 percent. That might not seem like much. But it represented the first such reduction in decades.

Carbon emissions have been going down in the EU. They dropped a bit in the United States in 2015. But the real reason for the global dip is China. Because of its recent economic slowdown, the country used a lot less coal last year.

So, this should be good news. But it isn’t. First of all, aside from China, the United States, and the EU, carbon emissions in the rest of the world continued their upward climb. Second, it’s more than likely that the drop was an anomaly — just as earlier predictions of “peak oil” proved premature.

And third, for any campaign to achieve zero emissions, cheap fossil fuels are the worst kind of disincentive. The price point is simply too irresistible — for car owners who want to go on vacation, companies that want to increase their profits, and governments that want to spur economic growth.

Saudi Arabia has recently been acting quite over the top. It intervened militarily in neighboring Yemen to put down an insurgency it blamed on Iran (with no evidence). It’s funneled money to its own preferred insurgents (namely, Sunni extremists) to topple Bashar al-Assad in Syria. And on New Year’s Day, it executed a number of “terrorists,” including Sheikh Nimr al-Nimr, a leading Shiite cleric.

Saudi Arabia, of course, is not known for its moderation. But the government in Riyadh has been acting even more erratically and paranoid than usual.

Or perhaps Saudi Arabia has good reason to be paranoid. Falling oil prices mean economic trouble for a country that depends on sales of crude for 85-90 percent of its revenues. The country is already running a huge deficit — some 15 percent of GDP. In their most recent budget, the Saudis indicated that some belt-tightening is in the offing, which will translate into curtailing key subsidies like gas and water.

Reduce subsidies and prices go up. If prices go up, people get upset. In other countries in the Middle East, price hikes have resulted in protest spikes. It’s no surprise, then, that Riyadh is doing what it can to eliminate potential sources of opposition at home and abroad.

Volatility in the energy market has helped to destabilize governments in the past: the Soviet Union under Gorbachev, the Suharto regime in Indonesia, or Venezuela just prior to the ascent of Hugo Chavez. So, it’s not far-fetched to imagine the winds of change blowing through Saudi Arabia — or Russia, where the economic situation is edging toward desperate, or Iran, which is anxious to see the lifting of economic sanctions as a result of the nuclear deal.

But as F. Gregory Gause points out in a Brookings report from April 2015, oil prices are just one factor affecting government stability, and most oil producers have enough reserves to weather the volatility. Indeed, Gause imagined that falling oil prices might even promote greater stability in the Middle East as Iran and Saudi Arabia worked more closely to coordinate production cuts. In fact, with Saudi Arabia severing ties with Iran this week, it looks more likely that both will continue to pump oil aggressively, driving prices down even further.

It perhaps flirts with conspiracy to imagine that the United States has boosted energy production to keep prices low in order to promote unrest in Russia, or that Saudi Arabia has done the same to foster discontent in Iran. Both countries have plenty of other reasons to push the pedal to the metal, energy-wise. But policymakers in Riyadh and Washington would certainly not be upset if their strategy produced such side benefits.

The problem is that instability in Russia and Iran isn’t in the best interests of either the United States or Saudi Arabia. Washington needs the help of Moscow and Tehran to negotiate a solution in Syria. And the Rouhani administration, compared to a more hardline clerical government that could easily emerge in Iran, is a much better potential negotiating partner for Saudi Arabia (assuming, of course, that it even wants a negotiating partner).

Low energy prices have come along at a particularly opportune time.

Governments can’t sit back and expect the market to allocate resources wisely, especially when it comes to the environment. That investments are flowing into the renewable sector despite the dip in oil and natural gas prices is about all the luck we can count on. It’s not clear how long prices will remain low. During this period, governments must use the savings wisely.

Priority number one should be the removal of energy subsidies. Writes Moises Naim in  The Atlantic :

Energy subsidies, which amount to more than $540 billion per year worldwide, are as common as they are damaging to economies, the poor, and the environment, since they stimulate consumption and undermine efforts to save energy and use it more efficiently. According to the World Bank, these subsidies are highly regressive: As much as 60 or even 80 percent of what governments in the Middle East and North Africa spend to subsidize energy benefits the richest 20 percent of the population, with the poor receiving less than 10 percent of these public funds.

With prices so low, governments can more easily phase out these energy subsidies without causing as much disruption for consumers (while providing cash transfers to help the most disadvantaged).

The second priority is for governments to use the windfall from cheaper energy imports to provide a different kind of subsidy: for renewables. This is the moment when the world must take a sharp turn. Governments should focus on the public sector: reducing the carbon footprint of government buildings, schools, hospitals, and so on. But they must also make it economically irresistible for households to go solar, for utilities to build wind farms, and for businesses to make manufacturing more efficient.

The third priority is counter-intuitive. Energy producers must come together to reduce production. This will ultimately lead to higher oil and gas prices. But that is as it should be. If we are to achieve carbon neutrality, we have to make fossil fuels as expensive as possible.

The former Venezuelan oil minister Juan Pablo Perez Alfonso, a driving force behind the creation of the Organization of the Petroleum-Exporting Countries (OPEC), wasn’t interested in raising gas prices in order to collect windfall profits. An environmentalist of sorts, he considered petroleum “the devil’s excrement.” He saw OPEC — and its ability to cut production and boost prices — as a tool for conservation.

That’s the precisely the kind of wisdom we desperately need right now — when the devil’s excrement has become cheaper by the gallon than skim milk.