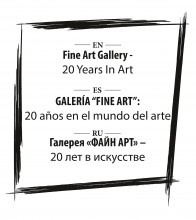 In 2012, Fine Art Gallery celebrated its 20th anniversary. Two decades, is it much or little? We would like to introduce one of the first galleries in Russia, before it’s creation the gallery business was virtually non-existent. Almost all galleries that were opened in the 90-s of the previous century are gone now. Experts speak about the difficulties of doing such business in Russia. But in the opinion of the curators of Fine Art, an art gallery is not a business but a way of life and service to beauty. Even in its creation, the authors were focused on fame and success in the circles of art lovers.

The anniversary of Fine Art Gallery was a beautiful and festive celebration at the Academy of Fine Arts. The evening event was held in the Yabloko Hall of Zurab Tsereteli, who was the first to congratulate. Zurab is also an artist of the gallery along with other stellar artists. His graphic art exhibition “Erotica” in 2008 in Fine Art literally blew up the Moscow art scene and the media. The names of the artists with whom the gallery has been working for 20 years evidence the accuracy of the choice and taste of the gallery owners. They include Edward Gorokhovsky, Dmitry Shorin, Vladimir  Dubosarskiy and Alexander Vinogradov, Igor Vulokh, Francisco Infante, Valery Koshlyakov, Andrey Grositsky, Igor Shelkovskiy, Sergey Shablavin, Konstantin Zvezdochetov, Irina Drozd, Anastasia Kuznetsova-Ruf, Galina Emelina, Ekaterina Belyavskaya, Sergey Golovatch, Dmitry Gutov, Lavrenty Bruni, Timofey Smirnov, Maria Shubina, Gor Chahal, Larisa Rezun-Zvezdochetova, and many others.

Fine Art’s collection includes pieces of art made in a variety of styles: painting, graphic art, sculpture, photography, video, and installations. The gallery has held more than 200 exhibitions, including in the leading museums of the country - Moscow Museum of Modern Art and the State Russian Museum. Fine Art repeatedly participated in trade fairs in Russia and abroad, international projects, as well as Sotheby’s and Phillipe de Pury auctions, thus contributing to the inclusion of the contemporary Russian art into the global context.

Fine Art cooperates with both famous Russian artists and young artists. The talent search, opening new names and making their artistic biographies is one of the main goals of the gallery. For example, in 2003 the gallery began to collaborate with Dmitry Shorin, an artist from St. Petersburg then unknown. He is a figurative painter developing his own style based on the understanding of current strategies and drawing inspiration   from the mass-media culture. The sources of his images are often the characters of glossy magazines, from which he shamelessly rips off their glamor putting them into everyday life situations. Shorin’s canvases present the sensual and erotic world inhabited by girls, whose life the viewer sees as if from behind the glass screen. Dmitry Shorin is a famous artist now - his works were sold at auctions and some paintings have taken a worthy place in private collections.

Almost from the first days of its existence, Fine art Gallery is working with Serge Golovach. Thanks to the activity of gallery owners and talent of the photographer himself, his pieces are included in the collection of the State Russian Museum, Moscow House of Photography, National Centre for Contemporary Art, and private collections. Initially his work was focused on male nudity. Physicality to Golovach is a technique of visualisation of his ideas and attitudes. The artist’s interpretation of male and female nature is very different from conventional notions. For example, graceful and slender young men are opposed to exaggerated huge women’s nature. These images hint at the inner strength and solidity of the women’s nature and emphasize the fragility and delicacy of the men’s nature. Later Serge Golovach became famous by his photographic portraits, as well as social and art projects:   “Project+”, “Eye to eye: Women against AIDS”, “Stars against AIDS”, “Your Health is in your Hands”.

The pieces of art by Ekaterina Belyavskaia, who graduated the Central Saint Martin College of Art and Design in London, have been exhibited at the gallery for about five years. When creating her projects, Belyavskaya combines classic themes with comic strips, elements of the youth club culture, and modern visual techniques. That was the style in which she presented the story of Little Red Riding Hood in the Kandinsky Competition 2007 and got into a short-list in the category “The Best Young Artist.”

Soon there will be the first exhibition of a very young artist Anastasia Kuznetsova-Ruf. The very first appearance of her painting “Immigrant” in the gallery’s collective commemorative exhibition has generated interest among experts and collectors. Anastasia is creating on the canvas a surprisingly striking three-dimensional space filled with air, but her technique in depicting details of the composition differs by its delicacy.

In 2005, the gallery was joined by Timofey Smirnov. He is graphic artist and painter, Candidate in Arts, in 2008 he was awarded the Gold Medal of the Russian Academy of Fine Arts for a series of graphic works “Journey Around my Room”. Smirnov’s pieces are often associated with collages. The central part of each work is a “quote” from the pieces of artists of the past, which is organically combined with the elements carrying the up-to-date information.

The names of the artist of the older generation are well known in Russia and abroad, and their works are in museums of modern art in various countries. The gallery is especially proud to work with the legacy of Eduard Gorokhovsky (1929-2004), the classic of Moscow conceptualism and the founder of the Russian photo-based art. “I am convinced that art is created by some higher force through hands, that these forces have selected”, the artist said. He was skilfully manipulating old photos. Like our memory, arranging our memories in layers one on another, Gorokhovsky was carrying photographic space in the plane of a painting or drawing.

The gallery hosted the first home exhibition of Igor Shelkovskiy, the master of the national culture, sculptor and artist. After he reclaimed his Russian citizenship and moved from France to Russia, the master showed new projects.

It was a happy event when another classic - the hard-edger and minimalist - Igor Vulokh returned to work after a long illness.

Based on the specific images, he depicts the inner essence of these objects through painting. In this case, the artist depicts the first impulses and intuitive perception of nature, space and time.

In developing the concept of Fine Art, the gallery owners decided to rely on traditional painting and graphics. They were not interested in social and political aspects  - the essence of the gallery’s activities became construction of the “ivory tower” or “art for art’s sake”. This dramatically differentiates the gallery from its competitors, which rushed to exhibit everything that had been forbidden not long ago - performance, installation, video, and photography. One could say that the authors of Fine Art have created the High Style in modern art. At the same time, from the very beginning, the projects had been causing a continuing interest on the part of critics and press, as well as heated discussions and publications.

The main objective of the gallery is to create a Russian contemporary art market. The first buyers of contemporary art were banks and corporations, but the marked increase in the art market began after 2002, when private buyers began to gather their own collections. Fine Art participated in the formation of a number of major collections, for example, the collections belonging to I. Markin (ART4.ru museum), Cultural Foundation “Ekaterina”, A.Chehoev (“New Museum”), and many private collections.