Interview given by Konstantin Kosachev, Head of Rossotrudnichestvo, to the VIGIL Journal 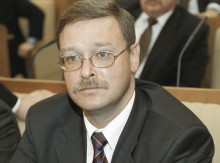 How would you evaluate the efficiency of involvement with the compatriots from the time it was decided to resume such involvement?

As I see it, the involvement with compatriots living abroad has went through several stages approximately corresponding to different stages of development of Russia, its foreign policy and national identity. If you do not quite understand the specifics of these stages, you will be unable to grasp fully why the policy towards compatriots was as it was in the 90ies, and why it was different in many aspects after 2000, and why it is shifting to some other level now, and not only where it concerns practical issues, but in terms of how the state and society see it.

And that’s important. If there is no agreement in the society that this involvement is important not only abroad, but within the country as well, there will be only quite formal actions of few agencies and public speculations of some politicians on the issue.

It is rather difficult now to talk about the overall efficiency of this involvement, since it had quite different goals and objectives at different stages. Some of them were achieved, and some - not, of course, there were mistakes and incorrect fathoming of situation and its prospects. A lot depended on the internal political situation of the countries where our compatriots were living: who would probably have foreseen that, for example, two decades after the Baltic countries gained their independence and joined the EU they would still uphold such a far-out for the 21st century concept as “non-citizenship”, or there still would exist mass discrimination on the ground of national origin. And even the partner countries of Russia in CIS have quite a few tendencies of conscious squeezing of all that is “Russian” from day-to-day life of these countries that impact, first of all, Russian expatriate communities. Should we speak here only about inefficiency and misjudgements of Russian policies? I doubt that. But we have a lot to think about.

What are the results? Can we say that the state sees this involvement as an efficient foreign policy tool?

I think we still haven’t reached the stage when the involvement with compatriots becomes one of efficient foreign policy tools. Still, we are often accused of active formation of some kind of fifth column playing some strange games against the countries where our compatriots live, and that is very far from the reality. If we do assert the rights of Russians to speak, learn, and think in their own language and the opportunity to treasure this for their children, that is pure assertion of humanitarian rights of the people we cannot leave without our care, and nothing more. As Sigmund Freud said: “Sometimes a cigar is just a cigar”: there is no point in searching for some hidden meaning where there is no such thing simply to justify human rights abuse. Russia does not want for its compatriots anything more than other countries - for theirs.

Another question is that our situation has been special from the very beginning - many people, and we are talking about tens of millions here, have become aliens against their will. Mind you, they’ve become aliens in countries which have just gained their independence, with quite fierce social developments and surge in nationalism; and still at every turn we get various ideas about Russian or Soviet “invasion” - and that impacts the situation of Russians in these countries and demands our attention.

Currently Russian-speaking communities abroad have mainly finished the stage of consolidation; those who wanted to form their own structures did so, those who did not want remained uninvolved, but they do have an option to join the existing organizations. Of course, these associations do not demonstrate a unity of opinions, but, probably, it is unavoidable, since we are speaking about living people with their own views, about people from different generations of migrants and their children, from different strata of society. We don’t have an objective to crack the whip at Moscow’s bidding, but we need to cooperate with them pursuing our common interests. So we would like to see culture, language, and the feeling of belonging to Russian civilization and of responsibility for its future as the basis for their unity, rather than ideology or politics. And that is what President V. Putin was talking about in his recent Address to the Federal Assembly of the Russian Federation.

We still have to help many people to solve their problems. But people and organization have already emerged willing to contribute to improvement of relations between the countries they live in with Russia, since they will mainly benefit from such an improvement.

How is the policy of foreign countries towards Russia changing thanks to the actions of compatriots?

Any evident influence of compatriots on the policy of other countries related to Russia may be possible only if it comes from consolidated close knit structures possessing a good standing and authority at the local political scene. Many global examples convince us of the efficiency of national lobbying mechanisms, and it concerns influencing the policies of many large countries, such as the USA, Canada, France, and others.

Well, now it is too early to speak about Russian communities as global influence leaders. There are many reasons to that starting from objective ones, such as historically short period of existence of expatriate communities and political nature of argument about Russians in the republics of former Soviet Union, and ending with subjective, such as internal contradictions, unwillingness of many people to participate in self-organization.

However it is hard to shut out the voice of Russians. It is true even for the Baltic countries, where they are deprived of many rights. At that this was the venue where the initiative to make Russian an official language of the EU. It is far from certain that it will get support in all European Union member countries. But it reflects the reality: millions speak Russian in Europe, and that’s a fact one has to take into account. Well, these people have not become a real power, but who can say that it will be like that forever? By the way, Russian is the most widespread language in Europe from Lisbon to Ural Mountains in the terms of number of people speaking it as a native language; it’s about 150 millions Europeans. German holds the second place (95 millions), and then we have French (about 66 millions), English (63 millions), and Italian (60 millions).

But look for yourself how difficult it is for the people to assert their right for legislative recognition of their native language’s status in other countries. It’s enough to recall Latvian referendum, which was conducted without full participation... of the native speakers! Or heated debates in Ukraine, where the law has been adopted though there are still questions to the statute and its practical implementation.

But, in any case, the change will come and Russian communities will be heard, if they are able to overcome their disagreements, to unite around common goals and immediate objectives, and to act consistently and cautiously. We can help them, but they must to walk the most part of this way by themselves, because we are speaking about other independent countries, other societies, other political and cultural environments. They have to become a power not just partners of Russia, and by no means as “Moscow’s right hand”, but as a functional, and thus - influential, element of their country. Then their demands will receive public and political support within the states they live in, the support without which even the most lawful demands are unlikely to have any chance for sound realization.

How do you see the short-term prospective of the Russian foreign policy? What areas are of crucial importance?

But I do not expect any dramatic changes. Well, in general, it seems that we are living through a unique period now, when Russia does not see anyone as its major enemy. We can bindingly claim that our country is ready for such a degree of close relations with any country that may be acceptable to such country. And almost always the ball is not in our court, for example, as it was in the situation with visa-free regime with the EU.

If anything, only Russia has friendly relations with the USA and Iran, Israel and Palestine, South and North Korea at the same time, though the last one is known for its restrained approach to the external world. We may be not happy with actions of some countries in relation to Russia or its partners, but it is not because we have a prejudice or hold a grudge against these countries and nations, but only because we react to some specific actions. And that is a fundamental difference from the position of some other state demonstrating internal motivation for their actions: whether they speak about some “Russian threat” or “Russian imperialism”, pay off old historic scores, try to export their views of the right political system for Russia, try to drive a wedge between us and third countries, or plainly ignore Russian forming the security architecture as they think fit.

We got used to the expansion of NATO crying out “Russians are coming!” at every occasion, though Russians, actually, are not going anywhere. But any our concern on the matter is immediately perceived as aggressive behaviour. This absurd situation must be changed somehow.

As to the priorities, of course, we see the former Soviet Union territories and integration projects with Russian participation as the key areas. It is important to understand here that it is of equal importance for Russians, as well as for the partner nations. I’m talking about simple people here, as it is supported by the example of the European Union; difficulties in relations between the states still persist, and sometimes even get worse, but people greatly benefit from the integration. That is why we are sure that everything we are doing in this area is important and beneficial to everyone, so there is a good chance of success.

Well, as to Russian foreign policy, we would like to see adequate picture of it, rather than making it more popular. Now we have a situation when each step taken by Russia in the world becomes overgrown with such layers of interpretations and versions that its initial, and main, meaning simply sinks in the interpretations and comments. We are concerned about military infrastructure of foreign alliances approaching our borders, and they say that Russia is afraid of the democracy coming closer. We want the conflicts in Syria, Libya, and Iraq to be resolved with participation of all parties and taking into account their respective interests, but we get accused of protecting the dictators we support out of some ideological kinship and of not rendering our absolute attachment to “the only right” position of one of the parties of the conflict. And we see it almost everywhere.

So, as they say, beggars can’t be choosers: we don’t need any varnish; we would be glad if people simply knew the truth and understood our actions and motives. And here, of course, we do need support of the media with honest intent to get things