Brazil is a country with a promising economic potential. The official state currency is the Brazilian real. Huge deposits of minerals, fertile lands create excellent preconditions for the development of mining industries and agriculture. Of all the countries of South America, Brazil has the most tangible impact on the international economy.

A characteristic feature of the Brazilian economy has always been its closure to external investment. Local companies set high prices for goods at a relatively low purchasing power of the population. This gave birth to a socio-economic phenomenon called the "Brazilian price", which is characterized by a sharp differentiation in the incomes of Brazilians. 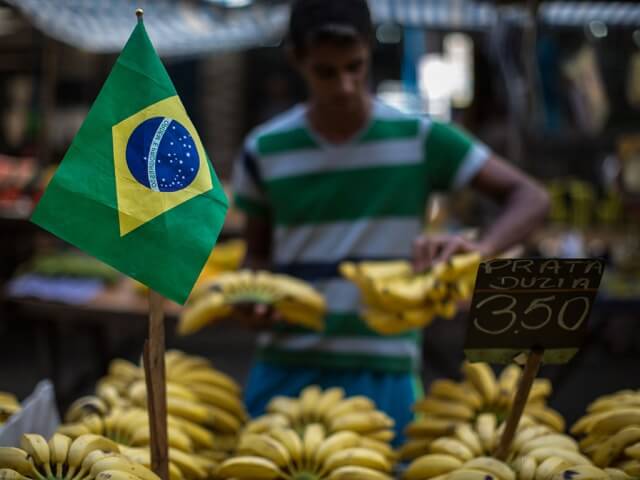 In the 90s of the 20th century, the government of Brazil launched a series of promising reforms. As a result, the country's economy emerged from the crisis and began to attract foreign investments. The inflow of external capital not only strengthened, but also favored the growth of the rate of the Brazilian currency.

The leading role in the economy of this Latin American country is played by the mining industry. Brazil holds the leading position in the world for the extraction of iron ore. In addition, uranium and manganese ore is mined here. The bowels of Brazil are rich in diamonds, bauxites, gold, beryllium.

The main branches of a manufacturing industry:

Transport lines are mainly located in the eastern part of the country. Railways and highways connect agricultural areas and mines with ocean ports. Foreign trade is developing thanks to sea and air transport.

The Brazilian government initiated the development of a program that provides for a gradual transition from expensive gasoline to ethanol. Therefore, sugar cane processing enterprises switched to the production of a new type of fuel.

Brazil - the world leader in the cultivation and export of beans, cocoa, bananas, sugar cane, soy. Coffee is the pride of the country. Coffee plantations supply grains to the population of the entire globe. This Latin American country has for many years been the world's leader for the export of coffee.

Livestock production is most developed in western and central areas. Farmers in Brazil are focused on breeding cattle and pigs.

The official state currency since 1994 is the Brazilian real. Its rate is fairly stable relative to the world's leading currencies. The economy of the country is developing steadily, and the Brazilian real can be called a reliable monetary unit.

Brazilian law allows you to import into the country unlimited amounts of foreign currency. But the import of Brazilian money is strictly regulated. Tourists are advised to have euros or dollars, because to exchange another currency will be extremely problematic.

Currency exchange usually does not cause problems. Conversion is carried out:

● at points of exchange;

The most favorable exchange rate for a foreign citizen is offered by small exchange offices, but the exchange in the hotel will hit your pocket the most.

The only taboo is street "money changers". Counterfeiters will not fail to deceive a gullible foreigner. Often, instead of the current currency, tourists are given cruzeiro or old reals, which have long been removed from everyday use.

It is possible to distinguish real money from fake ones only in the bank branch with the help of a currency detector. Each note has several signs of authenticity:

2. signatures of the Minister of Finance and the President of the Central Bank of Brazil are printed in very small special type;

3. at certain places of the banknote, microscopic letters are marked, which can be considered with the aid of a magnifying glass.

ATMs in Brazil are ubiquitous, but their work schedule is from 6-00 to 22-00. In addition, they do not work with all international plastic cards. Preference should be given to the Visa monetary system. In Brazil, it is not profitable to withdraw cash from plastic cards: the exchange rate will be maximally unprofitable. The Bank holds an additional commission for such transactions.

It is better to use the plastic cards in shops, hotels and cafes. It is strongly advised to keep as little Brazilian currency as possible and of small dignity. Getting change is also problematic.