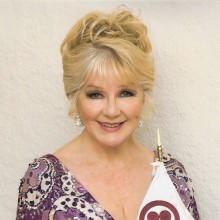 Alicia Rodriguez is a world renowned actress who played in 53 films and TV series and obtained nine awards as the Best Television Actress of Mexico. But the most important activity of her life she has been involved with during the last 27 years is self-sacrificing dissemination of the Banner of Peace and the Roerich Pact ideas related to protection of cultural values of world significance all over the globe.

Alicia Rodriguez was nominated to the Nobel Prize of Peace in 1997 for her peace-keeping efforts. By the way, she was the first woman in Mexico and Spain who has ever been nominated for the prize.

Her two books “Find your mission” and “Transform yourself into the Banner of Peace” have become bestsellers. She obtained a doctorate degree in Spanish literature.

Alicia Rodriguez has visited Altai four times: in 1990, 2005, 2008 and this year. In 1990 Alicia Rodriguez participated in “Altai-Himalaya” International Conference and hung the Banner of Peace at the foot of the Belukha Mountain. 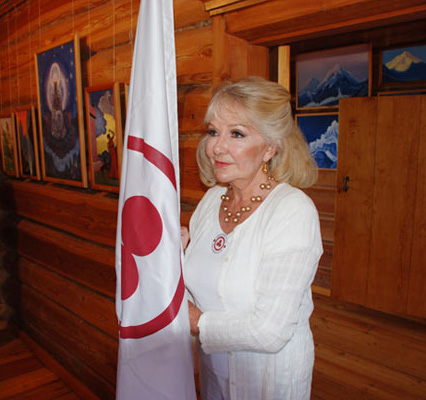 I met Alicia on the Internet. After the eleventh regional scientific and practical conference 'Cultural heritage of the Roerich family within the context of modernity' held in Barnaul on 23-24 of March 2013 I shared a photo-report about her on such a social networking site as Facebook. In the process of preparation for the conference the hall of the regional library where the conference took place was decorated with a copy of N.K. Roerich and the Banner of Peace. As Alicia was my friend on Facebook (a friend is merely conditional notion for a social networking site as you can have an idea of the person only considering the data posted on the site without coming across the person in real life) she saw the photos and asked me: 'Who are you and where are you from?' I told her that I was an engineer from Barnaul. She was so happy to know that! It turned out that she was going to visit Altai but lost all the connections and asked me to restore them. At her request I sent her E-mail addresses of our GMILIKA museum (State Museum of History, Literature, Art and History of Altai), Roerich Society in Siberia based in Novosibirsk and Belovodiye Roerich society in Biysk. That is how she restored the lost connections with Altai and Novosibirsk. We exchanged E-mail addresses and were in touch since then. When Alicia came to Barnaul in June 29, we met as friends already. By the way, she came to Barnaul alone and not accompanied by anyone which must have been a kind of a deed for her. It was sad though that apart from our five friends and Ksenia (hostess of the house in Barnaul where Alicia stayed for a night) nobody else met her.

This year Alicia Rodríguez stayed in Altai from June 29 to July 27. But, according to her words, the trip could have been cancelled. Dark forces made the process of getting visa to Russia difficult. She was helped by a Russian ambassador in Mexico who came to know about Alicia's wish to visit Russia, cooperated with a Russian ambassador in Spain and just presented her with the visa. She considers this to be a little miracle.

In Altai Alicia had three large meetings: on June 30 at the family entertainment centre of Belovodiye  Roerich society in Biysk, on July 15 in Chendek village of Ust-Koksinsky district in the creativity centre during summer meetings of associates and on July 26 at GMILIKA museum in Barnaul.

During the three meetings they displayed a film about Alicia Rodriguez's mission that lasted 27 years and was related to the delivery of the Banners of Peace in different parts of the planet following by her comment. Thus, the film showed a woman, an actress who, according to Alicia's words, had been paralysed for many years and used a wheel chair. And during the presentation of the first Banner of Peace that occurred 27 years ago the woman got on her legs after Alicia approached her with the Banner and became totally healthy after she touched the Banner. Then she had lived and worked as a healthy person for many years. In the beginning of her activity in the Committee of the Banner of Peace Alicia was told that she wouldn't be able to do anything without money. But money was always there for her. During 27 years she visited many places on the planet but never faced problems with money, accommodation and tickets. Working at a large Mexican TV company watched by a hundred million people daily she made the Banner of Peace the logo of the news program. Then she thought it would be nice if one million of people could see the Banner of Peace but it would be even better if the Banner could be seen by the people of the entire planet. Three month of negotiations permitted her to have the Banner of Peace at the Central stadium of Mexico along with other banners during the World football championship. People of the whole Planet could see a 28 meter wide Banner of Peace during the TV broadcasting. Alicia shared a story about presenting the Banner of Peace to His Holiness the 14th Dalai Lama, who told her about his great respect to Nikolai Roerich and that he is aware of his incarnation as a Tibetan Lama. Dalai Lama the 14th expressed his very respectful attitude to the sacred symbol of Banner of Peace. Evaluating 27 years of the mission Alicia is sometimes surprised how she managed to do so much within the years.

At the meetings in Chendek they showed an interesting film about delivery of the Banner of Peace by Alicia Rodriguez to the government and the people of Queretaro State in Mexico in 2010. It was a true sacred ceremony when 45,000 people stood hand in hand and delivered the Banner of Peace to one another till it reached the top of sacred Bernal Mountain that was 2000 meters high.

At the meetings with people in Chendek Alicia said that her mission was to spread the ideas of the sacred Banner of Peace all over the world. That was the planetary mission. She was inspired for the mission by the Great Teachers. It was Altai where she uttered the words for the first time: Master Morya and Teacher Nikolai Roerich. It was them who chose her. Before her mission, 27 years ago, she hadn't heard the names. She unites spiritual leaders, leaders of countries and common people of the entire planet with the flame of her heart and Banner of Peace. During her meeting with a Russian ambassador in Mexico she was promised to be given an opportunity to officially deliver the Banner of Peace in Russia in 2014 that was announced the Year of Culture.

Alicia mentioned that her being famous as an actress contributes to the success of her mission. When she comes somewhere to deliver the Banner of Peace people consider her as a congenial person.

When she delivers speech to people and sometimes at a rather high level for example at a United Nations panel, she tries to speak not from her mind but with her inner fire - the fire of heart. Her speech always reaches the hearts of other people in spite of the fact that they belong to different nations, have different ideas, and speak different languages. The language of the heart is understood by everybody.

Alicia mentioned her age and said she was to pass her mission to somebody else. She believes it will probably be a woman or possibly a man, she needs to see 'a key' in the person and she will understand who it is. According to her words, the person is getting ready to continue the great mission already.

While staying in Altai as a guest Alicia Rodriguez appeared to be a simple, open and kind person. She communicated with local people a lot. Afanasiy Gelich, an artist from Nizhniy Uimon village, depicted her in the picture where she is riding the horse with the Banner of Peace in her hand, and the standing Teachers are blessing her. Fyodor Putintsev, the Buryatiya Buddhist, who stays in Ust-Koksa village of Altai now, participated in the restoration of Maitreya statue in St.Petersburg. After the restoration one fragment of the bracelet from the statue was not used, so he gave it to Alicia as a present. Her wonderful stories can never be forgotten.

We can't help noticing that Alicia Rodriguez looks very well for her age. And she told us the secrets of how to look young: meditation, rightful thinking and total correspondence between the words and actions. She said that when thoughts, words and actions are in harmony, health and youth are also preserved.

There is no doubt that Alicia Rodriguez is a legendary person of planetary level and her visits of Altai went down in history.