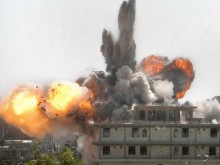 The US military has adopted an Israeli procedure known as “roof-knocking” in its war on Islamic State, also known as ISIS or Daesh, adding yet another failed Israeli tactic to its counterterrorism toolkit.

Roof-knocking entails striking the roof or upper story of a home or building with a mortar shell or missile prior to bombing it with even bigger munitions, in a supposed effort to warn civilians inside that they should evacuate.

Israel used this tactic to absolve itself of liability for killing civilians in Gaza. But human rights investigators found the tactic to be ineffective and at times deadly to the very civilians it was allegedly supposed to protect.

Two years later, however, the US is copying it.

Air Force Major-General Peter Gersten, deputy commander for operations and intelligence for the anti-ISIS coalition, told reporters on Tuesday that the US employed Israel’s roof-knocking tactic in the killing of an alleged ISIS financial operative in Mosul, Iraq, in early April.

The ISIS “finance emir,” as Gersten called him, “was the major distributor of funds to Daesh fighters,” which raises questions about the lawfulness of targeting a person for death while they’re not engaged in combat.

“We watched him come and go from his house, we watched his supplies, we watched the security that was involved in it. And we also watched occasionally a female and her children in and out of the quarters,” he said.

Gersten then invoked the familiar Israeli and American excuse for civilian casualties, saying, “They are using the civilian force as human shields.”

According to Gersten’s retelling, the US devised a strategy to avoid harming the woman and children inside.

“We went as far as actually to put a Hellfire [missile] on top of the building and air-burst it so it wouldn’t destroy the building, simply knock on the roof to ensure that she and the children were out of the building,” he explained. “And then we proceeded with our operations.”

Gersten went on to confirm that Israel was the inspiration.

“We took the tactics and technique and procedure from” Israel, he told reporters. “We’ve certainly watched and observed their procedure.”

Gersten noted that the US also dropped leaflets to warn people below of the coming bombardment, another method Israel employed in Gaza despite there being nowhere safe to flee.

But just like in Gaza, these tactics failed to prevent civilian deaths. The woman whose life Gersten claims the US military was trying to protect was killed in the US strike.

Gersten acknowledged that the US operation “ultimately ended up in a civilian casualty.”

“So, as much as we tried to do exactly what we wanted to do and minimize civilian casualties, post-weapons release, she actually ran back into the building,” he said.

Gersten should have known – by examining the actual record of the Israelis – that the roof-knocking procedure is no way to protect civilians.

Israel’s military assault killed 2,251 Palestinians in Gaza in the summer of 2014.

According to the independent inquiry commissioned by the UN Human Rights Council, the vast majority –1,462 – were civilians, including 299 women and 551 children, 68 percent of whom were under the age of 12.

Another 11,000 Palestinians were injured, including 3,540 women and 3,436 children, nearly 10 percent of them suffering permanent disabilities.

In November 2014, Chairman of the Joint Chiefs of Staff General Martin Dempsey claimed that the US military had sent a “lessons-learned team” to Israel weeks after its war on Gaza to study and emulate “the measures [Israel] took to prevent civilian casualties.” Dempsey specifically applauded Israel’s roof-knocking tactic.

But in a statement to The Electronic Intifada, the Pentagon denied that the US was seeking Israel’s advice, noting that Israel did not do enough to avoid civilian casualties.

The independent inquiry commissioned by the UN Human Rights Council concluded “that the ‘roof-knocking’ technique is not effective.”

It noted that the explosions often caused confusion and gave residents little time to react.

Israeli airstrikes usually followed within 3 to 5 minutes of the roof knock, according to the report, giving occupants little time to flee, especially small children, the elderly and disabled.

On 29 July 2014, Israel launched a guided bomb at the Dheir family house in Rafah in southern Gaza, totally destroying it.

In total, 19 family members were killed including nine children and seven women. One of the women was pregnant. This attack followed a roof knock.

But according to the UN report, the family members “did not understand that the strike was a warning until they were told by a neighbor that they had to flee. While on their way out, 19 out of the 22 individuals present in the house died.”

In other instances, “families fled buildings following an airstrike on the roof or top floor believing that the strike was a warning, only to be struck by a targeted missile once outside the house and on the street.”

As Amnesty International’s Philip Luther stated, “There is no way that firing a missile at a civilian home can constitute an effective ‘warning.’ Amnesty International has documented cases of civilians killed or injured by such missiles in previous Israeli military operations on the Gaza Strip.”

Sarah Leah Whitson, the Middle East and North Africa director of Human Rights Watch, similarly declared: “Warning families to flee fighting doesn’t make them fair targets just because they’re unable to do so, and deliberately attacking them is a war crime.”

Amnesty went further in a detailed report that accused Israel of knowingly bombing homes and buildings full of civilians without any warning at all, wiping out entire families in the process.

Even US military officials, no strangers to war crimes, were appalled by Israel’s behavior in Gaza.

“It’s not mowing the lawn,” commented one senior US military officer, using Israel’s euphemism for its routine assaults on the Gaza Strip. “It’s removing the topsoil.”

Despite some acknowledgement of Israel’s atrocious conduct, the US has made a habit of adopting Israeli policies as its own, with dreadful consequences.

Israel’s “targeted killing” policy, though condemned by the Bush administration in 2001, has been embraced as the centerpiece of President Barack Obama’s counterterrorism strategy.

What was once a highly controversial Israeli method to suppress Palestinian resistance is now used by the US to kill thousands of people in Yemen, Pakistan, Afghanistan, Somalia, Syria and, once again, in Iraq.

In his book, Consequence: A Memoir, former US interrogator Eric Fair reveals that Israeli forces trained US interrogators in how to use a torture device known as the “Palestinian chair.”

Fair says that the Israeli-developed torture technique, which immobilizes its victims in an excruciating stress position, was used on Iraqis in Fallujah.

It is no coincidence that the US “war on terror” bears a striking resemblance to Israel’s occupation and colonization in Palestine.

After all, the “war on terror” doctrine was first pushed by Israel to justify its criminal conduct against Palestinians and their neighbors.

The US applied a similar framework to its imperial project in the Middle East and the consequences have been nothing short of catastrophic.

The US “war on terror” has coincided with a nine-fold increase in terrorism-related deaths around the world since 2000, while generating the worst refugee crisis since the Second World War.

These Israeli tactics have clearly backfired, producing anger, hatred and blowback against the US while making the world a less free and more dangerous place.

Yet the pattern continues.