Are the leaders of European member states of NATO planning to follow the example of José Manuel Barroso, who became a lobbyist for Goldman Sachs after his term as president of the European Commission? Were they using the NATO summit to prepare for a career switch as consultants to General Dynamics or some other US arms manufacturer? The suggestion is of course absurd — but hardly less so than their announcement at the July summit in Warsaw that NATO will deploy a new mobile unit of 4,000 troops in Poland or one of the Baltic states — within artillery range of the home base of the Russian fleet in the Baltic, and of St Petersburg.

Russian leaders already felt resentful towards NATO — a cold war organisation that ought to have disappeared with the Soviet Union (1) — for meeting in the city where the Warsaw Pact was signed in 1955 under the aegis of the USSR. The views of US army general Curtis Scaparrotti, NATO’s new commander in Europe, won’t have helped: ‘The command structure has to be agile enough that from peacetime to provocation to conflict ... is a natural transition’ (2). NATO also invited Petro Poroshenko, president of Ukraine — not a member of NATO and in a state of simmering conflict with Russia. Beat that for provocation.

Poroshenko heard President Obama restate his ‘strong support for Ukraine’s efforts to defend its sovereignty and territorial integrity in the face of Russian aggression.’ So western sanctions against Russia will remain in place ‘until Russia fully meets its obligations under the Minsk agreements’ (3). The US and its allies persist, therefore, in obscuring the role of Ukrainian initiatives in Russia’s illegal annexation of Crimea, as well as in the lack of progress regarding the Minsk agreements. 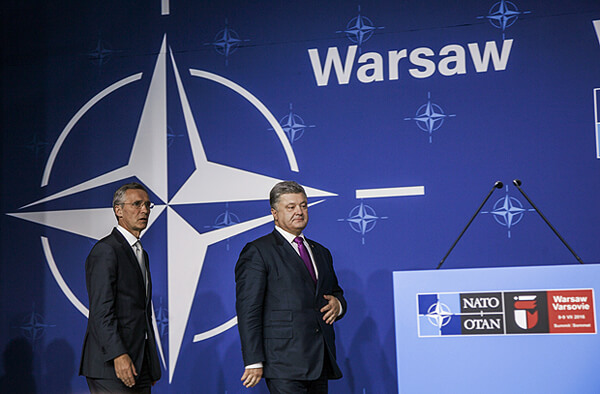 Why maintain tension between European states and Russia? One reason could be that it enables the US to prevent any rapprochement between them, and ensures, after Brexit, that its most biddable ally, the UK, remains closely bound to Europe’s military destiny. Germany has also increased its military budget and believes that ‘without a fundamental change in policy, Russia will constitute a challenge to the security of our continent in the foreseeable future’ (4). It’s tempting to say the same of NATO.

The sound of drums on the Russian border has been drowned out by other noises. President Obama had to cut short his European trip after the police shootings in Dallas. François Hollande, in his address on 14 July a few hours before the slaughter in Nice, mentioned his hairdresser’s salary — but not the Warsaw summit, where France agreed to contribute to the troop deployment in Baltic states, bordering Russia.

(3) Signed between Russia and Ukraine in 2014 to end the conflict in eastern Ukraine. See Igor Delanoë, ‘Between war and peace’,  Le Monde diplomatique,  English edition, March 2015.