On June 12, 2016 Omar Mateen shot and killed 49 people at a nightclub in Orlando, Florida, before being killed by police himself. Those are the simple facts of the case. Press coverage in the aftermath has been predictably overheated but rarely enlightening.  The torrent of information makes it difficult to separate fact from fiction or to analyze events in any meaningful way. The most important points about Mateen have been obscured because the truth is inconvenient to the government and to its allies in corporate media.

Mateen was motivated by anger over United States imperialism and probably hatred of the LGBTQ clientele of the club. He was also among the population of insane people who found a time and place to act out his obsessions. Mateen was the American born son of immigrants from Afghanistan. He had a troubled personal history including acts of domestic violence and a multitude of threats made against other people. Those threats were frequent and disturbing enough to cause the FBI to interview him twice in recent years.

Mateen made several 911 calls during the attack and claimed to be acting in the name of Islam. FBI redaction obscures some of what he said, but he did invoke Islamic resistance to the United States and demanded that it cease bombing Iraq and Syria. 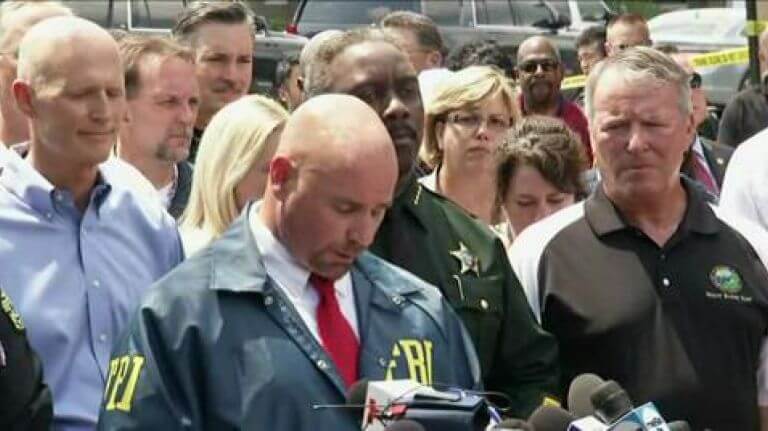 His father, Seddique Mateen, had his own delusions of grandeur, among other things claiming to be the president of Afghanistan in exile. Media reported that the elder Mateen expressed support for the Taliban without mentioning that the United States government once supported the Taliban with arms and money.

The hodge podge of narratives are confusing but one aspect of the story is worthy of more attention and is an indictment of America’s war of terror. In 2013 Mateen threatened a court officer with a claim that he knew al Qaeda operatives. According to local law enforcement the FBI then attempted to lure Mateen into a phony terror plot but he “did not bite.”

The FBI has a long and ignoble history of entrapping people, and hundreds have been convicted based on the work of informants. There is at least one other instance of a man targeted to become an informant who instead lashed out and performed an act of terror on his own.

In 2013 two British men killed a soldier in full view of witnesses. They immediately gave themselves up and proclaimed that they acted to stop their government from killing people in the Muslim world. One of the men was also under constant pressure from the MI5 security service to become an informant despite the fact that he repeatedly refused. When a friend spoke to the BBC about this contact he too was arrested.

American and British security agencies behave in the same fashion. They bring terrorism to people around the world and to their domestic populations as well. Blowback and the suffering of others always follows.

Mateen’s personal history of anti-social, even psychotic behavior makes it difficult to ask good questions about this case, but his family history and the attempt to entrap him say a lot about how imperialist foreign policy creates victims all over the world.

The elder Mateen came to the United States at the height of American support for opponents of the Afghanistan government. His tale is classic. An émigré with grievances is given assistance because of his political beliefs. Having been given special treatment he then lives the life of a delusional, paranoid exile.

At a time of increased U.S. violence and surveillance his disturbed son comes in contact with law enforcement who attempt to include him in their long list of naïve and/or mentally ill victims. If Omar Mateen was inspired by ISIS it is worth pointing out that this group is strongest in places where the U.S. has intervened. Iraq, Libya and Syria were all targets of regime change where the most useful foot soldiers for the United States are jihadists of that ilk. Continued support for ISIS has killed many thousands of people and created an unending humanitarian disaster.

If Mateen’s crime was inspired by ISIS any condolences coming from president Obama are phony. ISIS wouldn’t exist without American support. Russian efforts to combat ISIS in Syria have been obstructed by the United States at every turn. Partygoers in Orlando suffered the same fate as nameless Syrians, Iraqis and Libyans. They were collateral damage and were sacrificed to the cause of imperial domination.

Mateen was obviously in need of mental health care but that doesn’t let the government off the hook for inspiring him to act. He might have ended up killing people somewhere else, just like the lone wolf, self-radicalized, psychotic Americans who kill in schools, universities, and movie theaters. But his madness played out under the influence of American foreign policy and the government shares responsibility for the carnage carried out on this occasion.

While Mateen was surely a sick individual he knew other terrorists when he saw them. He enjoyed taking photos of himself in NYPD clothing. It takes one to know one.