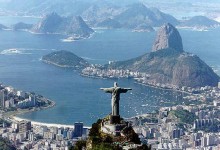 The São Paulo Metro was the first underground transit system in Brazil. The other metro systems are in Rio de Janeiro, Porto Alegre, Recife, Belo Horizonte, Brasília, Teresina and Fortaleza.
There are about 2,500 airports in Brazil, including landing fields: the second largest number in the world, after the United States. São Paulo-Guarulhos International Airport, near São Paulo, is the largest and busiest airport, handling the vast majority of popular and commercial traffic of the country and connecting the city with virtually all major cities across the world. With 13,728,000 passengers annually it ranks 80th worldwide
For freight transport waterways are of importance, e.g. the industrial zones of Manaus can only be reached by means of the Solimões- Amazonas waterway (3250 km with 6 meters minimum depth).
Coastal shipping links widely separated parts of the country. Bolivia and Paraguay have been given free ports at Santos. Of the 36 deep-water ports, Santos, Itajaí, Rio Grande, Paranaguá, Rio de Janeiro, Sepetiba, Vitória, Suape, Manaus and São Francisco do Sul are the most important. Bulk carriers have to wait up to 18 days before being serviced, container ships 36,3 hours on average.